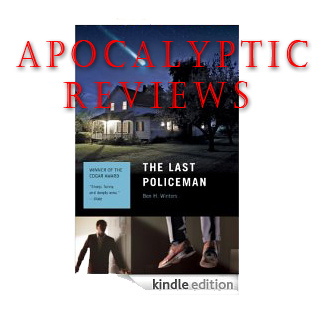 This pre-apocalyptic-who-dunit may not be everyone’s cup of tea, but I was gulping this fragrant brew down. I picked up the Last Policeman Series on sale—I’m a sucker for eBook sales—and started reading the first book of the trilogy (of the same name) and was immediately hooked. Set in a pre-apocalyptic world, months before an asteroid is 100% certain to hit earth and wipe out all humanity: Most have quit their daily jobs and gone “bucket list” and many have opted for the ultimate out, suicide. This first person narrative follows a stalwart detective, who appears on the scene of another apparent suicide in the men’s room of a pirated McDonalds—most corporations are bankrupt but various enterprising individuals are offering questionable burgers at high prices under the McDonalds name (no this is not China). Only this suicide appears to be a murder and no one cares to solve it, because of course the world is ending.

It’s one of the better written books that I’ve read in a while. The author’s crisp rich use of language will draw you into the story quickly and keep you interested till the end. Here’s an example:

The world is decaying bit by bit, every piece degrading at its own erratic rate, everything trembling and crumbling in advance, the terror of the coming devastation a devastation of its own, and each minor degradation has its consequences.

There are no big firefights, no mass death from the anticipated apocalypse, and not much in the way of horror. However, if you want a beautifully written whodunit mystery, set in a pre-apocalyptic landscape full of anxious malaise, then you’ll enjoy The Last Policeman, and probably the series.

It’s currently not cheap (as far as eBooks go), but worth the dough: CLICK HERE for more info or to order.