CICADA Book One is Finished! 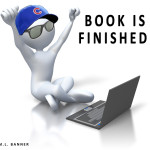 I am happy to report that I have finished writing CICADA Book I and it’s now in my editor’s talented hands. CICADA is the next chapter in the Stone Age Series, but in many ways, it’s its own series. Turns out the story was much bigger than the one or two books I had planned. Today, I’m announcing that CICADA will be a trilogy. Not to worry about long waits in between each book. I plan to release one every two or so months, before the end of this year.

If you’ve read the first two books in the series, you will love CICADA because it picks up right where DESOLATION left off, and there is a lot more of Max in this one.

If you have not read either Stone Age or DESOLATION, you’ll still love the CICADA trilogy because CICADA is written as a stand alone series.

CICADA is set a year into a post-apocalyptic world that has been beset by permanent solar storms, rendering our technology useless and leaving us humans hanging by a thread. The Cicada complex was supposed to be utopian, protectively-walled, scientific community searching for solutions to save our dying world. This Herculean task alone would be hard enough in the safe confines of Cicada. But there is no safe place in a post-apocalyptic world.

Outside their walls are hundreds of desperate squatters wanting in, a religious zealot with thousands of red-robed warriors prophesying their over-through, and a nearby Cicada-copy complex constantly planning to hurt or damage Cicada. And yet, it’s the evil inside Cicada’s walls that may destroy them.

CICADA is the exciting next chapter to the run-away best sellers, Stone Age and DESOLATION, coming exclusively to Amazon and CreateSpace August 2015.

Subscribers (see below) will get notified of pre-release discounts as well as opportunities to snag a free copy of CICADA for a review or to participate in our Cicada Wisper Campaign.