A 21st Century Attempt at a War of the Worlds Broadcast

On Halloween, October 31, 1938, Orson Wells broadcast The War of the Worlds on radio’s Mercury Theatre on the Air.  The 62 minute broadcast, made to sound like it was a live news show, shocked many who tuned in after the disclaimer, and thought that aliens were actually invading the US.  A small panic ensued, although the panic was more media generated, with 12,500 articles reporting on the broadcast, published over the following days.  Even Adolf Hitler was quoted as saying about the broadcast, that it was, “evidence of the decadence and corrupt condition of democracy.” (source http://en.wikipedia.org/wiki/The_War_of_the_Worlds_(radio_drama))

Opinions aside, this was one of the most successful viral marketing campaigns of its time, before viral marketing was even invented.  It made a name for Orson Wells, who went on to make great movies like Citizen Kane.

Today’s War of the Worlds

Starting October 28th, and leading up to Halloween (10/31/14), I plan such an experiment, to herald the release of my second book, DESOLATION in the STONE AGE Series. These books cover a subject far scarier and believable than alien invasion: solar storms taking out our power and infrastructure, and with it our way of life. We’ll see if I can channel my inner Orson Wells and get the word out.  Assuming it goes as planned, there will be some similarities to both broadcasts and some marketable differences:

Then:  Orson Wells’ broadcast did not draw a large share of the radio listening audience, because most Americans were listening to the more popular Edgar Bergen show.

Today:  I have very few social media followers, but thousands of readers.

Then:  War of the Worlds was broadcast for only 62 minutes.  But it was the press that carried the story several days: this is what made the story viral.

Today:  My plan is to broadcast “bulletins” from STONE AGE though Halloween, the day of DESOLATION’s release.  I am hoping that some social media influencers and some news sources will pick up my “broadcasts”, just as newspapers picked up the story of Orson Wells’ radio broadcasts.

What is the STONE AGE Series? 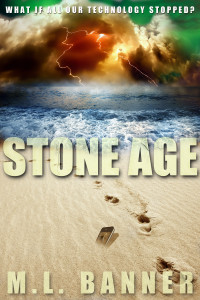 Imagine all technology stopping! This very well could happen if  large enough solar storms were to hit our earth. The STONE AGE Series of books (www.stoneageseries.com) fictionalizes what would happen to our world if a Carrington-Type Flare, similar to the one that hit earth on 1859. Such an event, it is argued by scientists, would destroy most of our technology: our power grid, water and food distribution, transportation,   communication, and most, if not all, common electronic devices. The result would be the mass death of hundreds of millions and would essentially send our society back to a new   Stone Age.

An astrophysicist featured in my book said it best, “Any day now we will be hit with a solar storm that will return us back to the Stone Age!” Dr. Carrington Reid

The Plan
One of the main characters of STONE AGE is a fictional scientist who, issues bulletins throughout the book to his subscribers, calling attention to the potential coming apocalypse.   Each bulletin is successively worse than the previous one, until the last (announced the day before The Event) says: “It is coming!” and describes the ensuing apocalypse that will follow.

I will have my fictional scientist broadcast each “Bulletin” each day on his website – I created one a few months ago for just this purpose – and then he will share that Bulletin via social media.

ML Banner will then share this with my social media audience, using appropriate hash tags, such as #IsThisReal? And a tag line like “Carrington Flare coming any day!”  I’ll ask a few influencers to do the same in different communities:  Prepper, Social, Sci-Fi, Science, Media, Conspiracy, etc.

My hope is that the story of this will be picked up by larger mainstream media services, leading up to the release of my book a day or two after the last Bulletin’s release.

Well there is my plan.  I admit a certain selfishness is behind this plan, as my ultimate goal is to sell more books.  But, I’m also very interested in calling attention to the seriousness of solar storms and what we can do to protect ourselves for the day when they will occur.

Want to get involved? Be sure to subscribe to my Twitter feed (ml_banner) or friend my author page (AuthorMLBanner) and then forward my appropriate posts to your followers/friends as well.